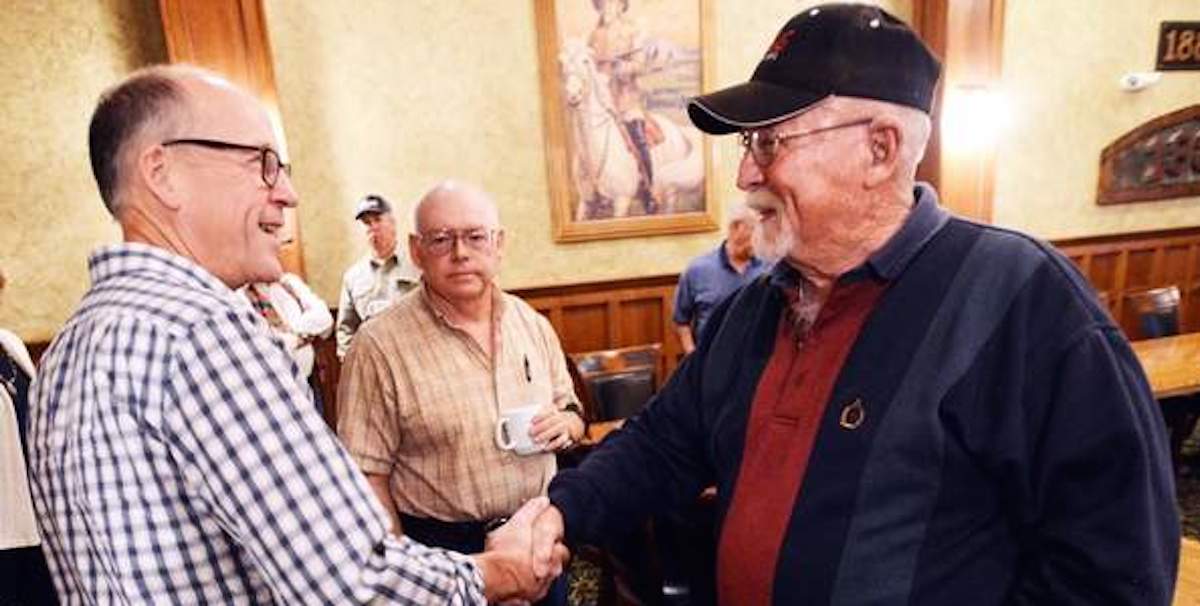 Oregon’s only congressional Republican is calling it quits.

U.S. Rep. Greg Walden announced Monday morning that he won’t run for reelection in 2020, putting a close to more than two decades in the U.S. Capitol.

“At the end of this term, I will have devoted 30 years to the important calling of public service; of helping bring people together to solve problems and leave our communities, our beautiful state and our great nation better off for the next generation,” Walden said in a statement, making clear he had no plans to run for another office. “For me, the time has come to pursue new challenges and opportunities.”

Walden’s decision had been rumored in recent days, but it is likely to surprise many in Oregon’s Republican establishment, some of whom expressed doubts last week when asked about Walden’s 2020 plans and the chance he might retire. The decision also marks a turnaround for a successful politician who earlier this year said he was focused on winning reelection and helping Republicans reclaim a majority in the U.S. House of Representatives.

Walden’s office did not respond to inquiries about his reelection plans last week.

The departure is almost certain to set off a dogfight among Republicans over who might replace Walden in the state’s only reliably Republican district, and it will likely have Democrats viewing the seat with fresh interest.

Since first winning his seat in 1998, Walden has twice led House Republicans’ campaign operations — in the 2014 and 2016 elections. He’s served as chairman of House leadership under former Speaker John Boehner and chairman of the powerful House Energy and Commerce Committee. In the latter role, Walden wielded influence on a wide array of issues, including health care, energy policy and the internet.

For nearly all of his time in Congress, Walden has served in the majority party. Prior to 2019, Democrats controlled the chamber for just four years of his tenure. When Republicans lost control of the House after the 2018 election, Walden’s committee chairmanship went with it.

Earlier this year, Walden dismissed speculation that he might be looking to exit Congress in an interview with Politico. Instead, he suggested he was bent on helping Republicans win back power — and rekindling his own influence.

Even so, speculation continued. As a mounting number of Republicans have announced they will not run for reelection in what could be a difficult 2020 race, Walden’s name has surfaced as a political moderate who could be ready for a change.

“About a month and a half ago there was an article” speculating on Walden’s retirement, said state Sen. Cliff Bentz, who, like Walden, represents a wide swath of eastern Oregon. “I saw it, and people began calling me. I said, ‘Call Greg.’”

The rumors circulated despite the political realities of Walden’s district, which the congressman has always won handily. The sprawling district, nearly twice the size of Maine, spans more than 70% of the state, but it contains few urban areas likely to go for more liberal candidates.

Even facing an energetic challenge from Democrat Jamie McLeod-Skinner in 2018 — and facing blowback for his role in trying to overturn the Affordable Care Act — Walden won the rosy-red district by 17 points. Republican voter registrations in the district outstrip Democrats’ by 8 percentage points.

One sign of Walden’s sure footing: His name didn’t appear on a recent “retirement watch list” created by the Democratic Congressional Campaign Committee, even as growth in cities such as Bend, Ashland and Walden’s home of Hood River suggests the district might become more challenging for a Republican incumbent. As he acknowledged to Politico earlier this year, the district “sure as heck ain’t getting any redder.”

In his statement Monday, Walden said he believed he could continue his string of victories if he chose to run again:

“Based on recent polling, strong fundraising, and the backing of my wife and family, I am confident I could earn the support of 2nd District voters for another term,” the statement said. “I’m also optimistic that a path exists for Republicans to recapture a majority in the House, and that I could return for two more years as chairman of the House Energy and Commerce Committee.”

The sentiment was echoed by U.S. Rep. Tom Emmer, R-Minnesota, who serves as chair of the National Republican Congressional Committee.

“I spoke to Greg and he assured me that he will remain heavily engaged in ensuring this seat remains in Republican hands,” Emmer said in a statement. “This is a solidly Republican district and it will remain so in 2020.”

“Rep. Walden’s departure from Congress only confirms that Republicans have seen the writing on the wall: They are not escaping life in the minority any time soon,” the statement said.

Jason Atkinson, a business consultant, filmmaker and former Republican state senator from Central Point, said Monday he was seriously considering a run for the seat.

“I’ve always been wondering when it would be right to return to public service,” said Atkinson, who served in the Legislature from 1999 until 2013. “This morning, I’m laying in bed and my phone is exploding.”

Walden’s departure from Congress marks the end of 30 years in elected office that began when he won a seat in the Oregon House of Representatives in 1988. Even then, at 31, Walden was steeped in Republican politics. He’d spent six years as an aide to U.S. Rep. Denny Smith, R-OR, prior to his own run for the state house.

Walden quickly ascended to a leadership role in Oregon’s lower chamber — and even flirted with a run for governor — before moving to the state Senate in 1995. Three years later, he won the congressional seat he holds today.

For much of his time in politics, Walden and his wife, Mylene, also ran a group of small radio stations in Hood River and The Dalles, an experience he has said gives him more expertise on broadcasting legislation than other members of congress. Walden sold the stations in 2007.

Despite his moderate leanings, Walden has maintained a relatively sanguine relationship with President Donald Trump over the last three years.

“My job is to get things done for the 2nd District of Oregon, first, and for the country,” he told OPB in late 2017, less than a year into Trump’s presidency. “I’m more valuable in doing that if I have a good strong, thoughtful relationship with the president of the United States.”

As Trump faces an impeachment inquiry by Democrats — and questions about whether he withheld foreign aid to Ukraine in an attempt to win political favors from the country — Walden, like his Republican colleagues, has declined to criticize the president.

He’s accused Democrats of a flawed process in the inquiry, and in late September, he suggested that the known facts about Trump’s much-publicized phone call with the Ukrainian president did not amount to “high crimes and misdemeanors” that would be impeachable.

Still, Walden has not been lockstep with his party’s standard bearer. He chafed in 2017 after he’d worked with the White House to craft legislation to overturn the Affordable Care Act. Trump first encouraged the bill, before calling it “mean” because it would result in millions losing their health coverage.

“It was not appreciated,” Walden told OPB. “I conveyed my displeasure to the White House.”

More recently, Walden has parted company with Trump on legislation involving a border wall and sanctions on Russia, among other things.

While Walden’s departure from Congress had been a subject of speculation, it came as a surprise to Republicans in his home state.

State Rep. Daniel Bonham, R-The Dalles, represents a swath of Walden’s district. He said recently that he’d heard nothing of the congressman’s plan to resign. “I’d bet against it, if I were a betting man,” he said.

Dan Lavey, a strategist who has helped with Republican campaigns, said last week he believed talk of Walden’s departure was “premature.”

Then there was Bentz, who said he’d talked to Walden months ago, shortly after speculation the congressman wouldn’t run again emerged. Bentz said Walden made no mention of future plans, and that he’d assumed the longtime lawmakers would run again next year.

“I would just hope that he is running again,” Bentz said last week. “Please, Greg. Please.”

Read the full story on OPB.com