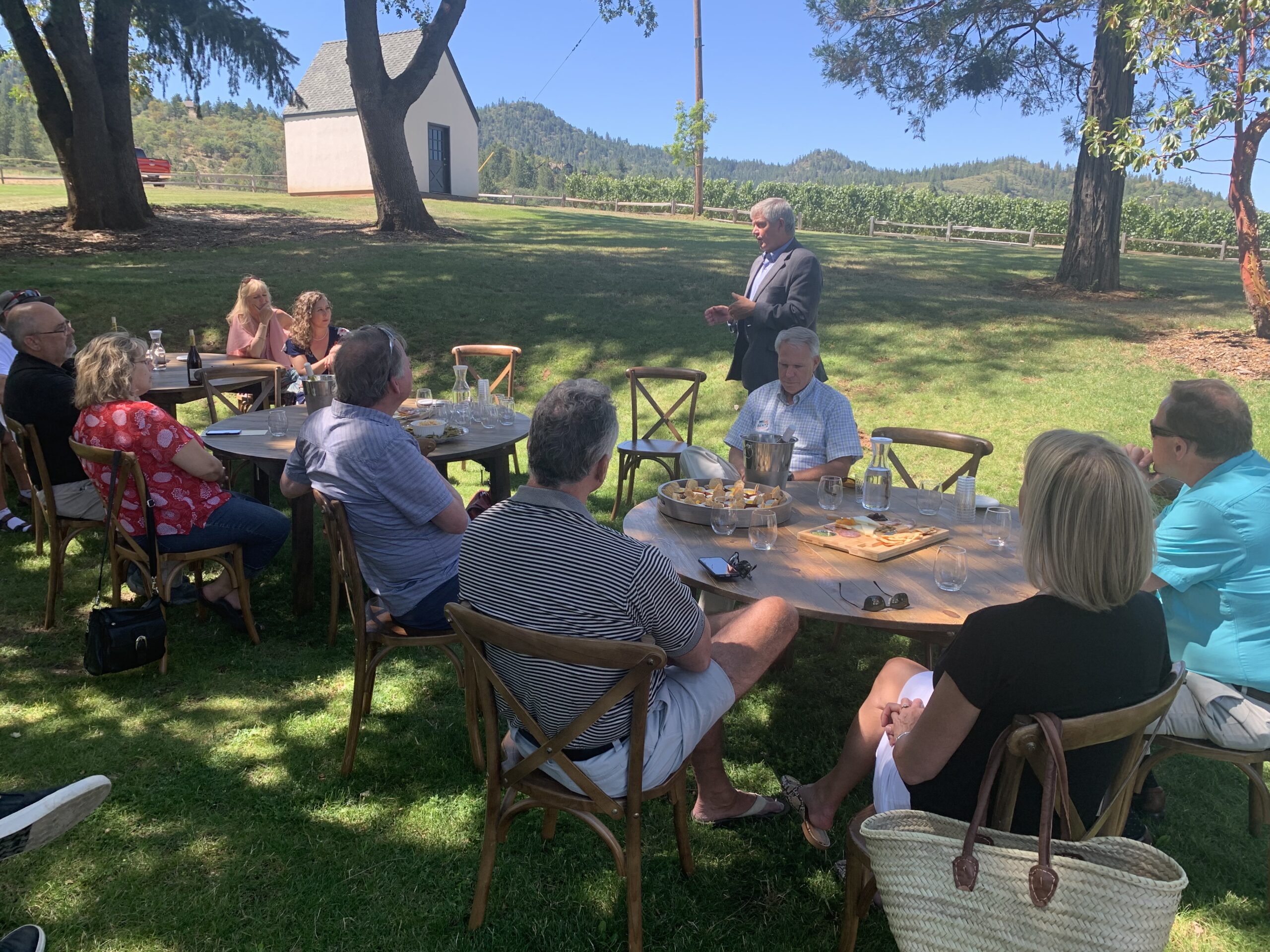 OREGON — It’s bigger than some states, includes two time zones and is a bright red Republican stronghold in a deeply blue Democratic state. Oregon’s 2nd Congressional District has been on electoral autopilot the past two decades, sending Rep. Greg Walden, R-Hood River, to Washington, D.C., 11 straight times. He’s the only Republican among Oregon’s congressional delegation of two senators and five members of the House of Representatives.

Something that hasn’t happened this century will occur Nov. 3, when voters will see no incumbent on the ballot. Walden is retiring at the end of the current session.

Republican Cliff Bentz, a former state senator from Ontario, emerged as the winner from a scrum of 11 candidates in the May 19 GOP primary. He’ll face writer and political strategist Alex Spenser of Klamath Falls, winner of the Democratic primary.

Odds are the Republican will take the oath of office next Jan. 3 when the 117th United States Congress convenes.

“Cliff Bentz is as close to a sure thing as you can get,” said longtime Oregon election analyst Jim Moore, a politics and government professor at Pacific University.

A more than 40,000 Republican voter registration edge over Democrats, combined with Spenser’s lack of name recognition and campaign funds, likely is enough for Bentz to win the district, Moore said. The district includes more than 203,000 non-affiliated registered voters, but Moore said those who go to the polls “break the same way as whatever the Republican-Democratic split goes.”

Democrat Jamie McLeod-Skinner, of Terrebonne, ran for the seat in 2018. She was an adroit fundraiser and campaigned non-stop, driving 40,000 miles across the district. She still only won 39% of the vote in a year Democrats piled up wins to take control of the House. With the COVID-19 pandemic, rallies and meetings in 2020 are going to be small or non-existent. Most of the campaigning will be online and ads on television or social media.

“Spenser maybe gets 35% of the vote, since there is no incumbent,” Moore said.

Spenser, 55, says she knows she has a tough task to get to Capitol Hill. But 2020 is different: an unprecedented election year of pandemic, record unemployment and a “divisive” President Trump at the top of the ticket.

“There’s going to be a blue tsunami,” she said.

Spenser didn’t start out as a congressional candidate at all. She was campaign manager for Raz Mason of The Dalles. When Mason dropped out of the race, she encouraged Spenser to jump in. On the night of the primary, the first returns showed Spenser trailing Nick Heuertz, a non-profit vice-president from Central Point. But in the end, she eked out a victory of just over 800 votes.

Molly Woon, deputy director of the Democratic Party of Oregon, said the party has just recently been reaching out to Spenser and other Democratic primary winners in congressional and legislative races to bring them into the concerted 2020 efforts in Oregon.

“I’m looking forward to meeting all the other Democratic candidates to compare strategies,” Spenser said.

U.S. Sen. Ron Wyden, D-Oregon, said the race is an opportunity for the Democratic Party.

“I have worked with Rep. Walden on issues that affect Oregon where we have found common ground,” Wyden said. “But in November, I’m with the Democrat.”

Spenser said she wants to tap into the large number of non-affiliated voters, along with Republicans who no longer can support the party’s agenda under President Trump. She sees water as one of the keys that will resonate with district voters. She supports a $450 million plan to restore the Klamath River by removing four hydroelectric dams in Oregon and California. It would be part of a national trend which has seen 1,700 dams across the nation removed in recent years. Wind farms can provide electricity and also help with irrigation, Spenser said. She wants a more efficient and equitable way to distribute water in Eastern Oregon.

“You have 90% of the water going to irrigation and 40% of that is lost through evaporation,” she said. “Meanwhile, wells are running low in Harney County. At the bottom is arsenic — we’re going to poison these people.”

Regardless of the message, the electoral number crunchers say Spenser is facing an uphill battle that looks more like a wall than a slope.

The Cook Voting Index rates districts by their propensity to back one party or the other in presidential races. The district is “R+11” — meaning it is expected to give the Republican nominee 11% more of the district’s vote than the national average. In 2016, the district gave nearly 55% of its vote to Donald Trump, while Democrat Hillary Clinton won 35%. In 2012, Republican Mitt Romney received 56% of the vote compared to 40% for President Barack Obama.

Covering nearly 70,000 square miles, district voters in the sparsely populated eastern, central and south central two-thirds of the state have voted solidly Republican over the past 40 years. Successive reapportionments have added reliably conservative areas to District 2, with Democrats largely content to put the largest concentration of the state’s Republicans into the district. The move has enabled Democrats to win and hold the other four House seats in Oregon.

One of the ironies is among the most politically flexible in the country — just not in a way that helps Democrats.

Nate Silver, an analyst of election data, showed Oregon’s District 2 is the 25th most politically “elastic” of the nation’s 435 congressional districts. Silver, editor of the political website FiveThirtyEight.com — named for the total of Senate and House seats in the country — measures how sensitive each House district is to changes in the national political mood. An elastic district will show big shifts in voter preferences. Inelastic districts tend to stay in a much smaller range whatever the immediate political situation.

Voter sentiment in District 2 can be moved a great deal — but the end result, a Republican victory, is the same. Walden won the seat by more than 70% of the vote in 2014 and 2016, but received “only” 56% of the vote in 2018. In most districts, a swing of 14% would likely bring victory to the other party. But in District 2, it means Republican victories range from blow-outs to comfortable wins.

Staking out the middle ground

During the recent Republican primary, the candidates often emphasized their allegiance to Trump. The best-known candidate, former Rep. Knute Buehler, R-Bend, fought the view of some Republicans that he was too moderate in the Legislature and during his unsuccessful 2018 bid for governor. Bentz was strong in the eastern portion of the district. Former Rep. Jason Atkinson of Central Point has support in the Medford/Grants Pass area. Jimmy Crumpacker, who moved to Deschutes County from Portland at the end of last year, won the endorsement of Oregon Right-to-Life and pitched a high-volume ad campaign aimed at knocking Buehler off.

On primary election night, the fragmented vote handed the nomination to Bentz, who won with 32%. It was under a third of the votes cast, but enough to beat Buehler at 22%, Atkinson at 20% and Crumpacker with 18%.

Like Walden, Bentz had put in years as a state lawmaker representing Eastern Oregon in the House and Senate, where he was known as somewhat of a wonk on transportation issues. While supporting Trump, Bentz didn’t make it a centerpiece of his campaign — in a group of candidates trying to grab the right side of the political spectrum, Bentz represented a conservative middle ground. He emphasized his family’s long history in the district, his conservative voting record in the Legislature, and stuck much of the time to regional issues like federal land use, water and agriculture.

During a May 2 online campaign forum, Bentz said he favored re-opening the eastern and central portions of the state from COVID-19 restrictions, in part so candidates could get out and listen to their future constituents in the vast district.

“Let’s go out and find out what people need,” he said.

Moore said if Bentz can get past Spenser in the fall, from then on he will have the most powerful weapon in politics — incumbency. At age 68, Bentz is five years older than Walden and would be unlikely to match Walden’s 22 years in office, if elected. But barring scandal, illness or a drastic shift in district boundaries, Bentz likely would get to pick when it is time for him to step down.

“He could have the district as long as he wants it,” Moore said.

That includes elections after new district boundaries are drawn to account for the 2020 census.

“Whatever happens in the rest of the state, the 2nd Congressional District will remain solidly Republican,” Moore said.

Read the full story in the Portland Tribune